According to Tiger Oak Media, “As Seattle continues to top best-of lists and garner international attention, the area has become a smart and logical choice for Chinese investors, immigrants and visitors. The National Association of Realtors reports that China has more than 2 million millionaires, 47 percent of whom plan to move out of the country in the next five years. According to Zillow.com, Seattle and Bellevue have been two of the top real estate markets searched for online in China. In addition, in 2014, of the University of Washington’s 7,299 international students, 3,845 were from China, with many of those students’ families purchasing homes for them to live in while they studied overseas. To recognize the positive impact the Chinese market has had on Seattle and the surrounding areas, Tiger Oak Media, publishers of the city’s premier magazine Seattle magazine, is publishing a special title called
Seattle Luxury Living. The entire magazine will be printed in Mandarin and distributed in China via
Sotheby’s Real Estate. It will also be available at luxury hotels in Seattle and sent out to readers upon request.” 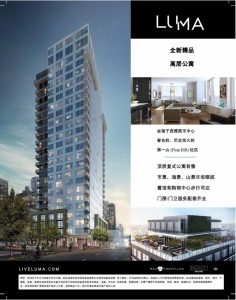 We purchased an ad for our client LUMA and here is how it turned out when translated.